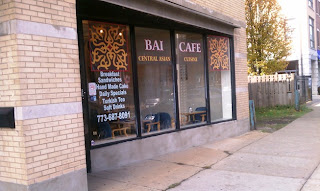 For an ethnic restaurant that's been open in the heart of Lakeview for 9 month not to capture even one Yelp or LTHforum post is remarkable. Will my little blog contain the place's first-ever online review? From the looks of the clientele and half-dozen cabs parked under the el tracks just next to Bai, I gather that the place caters to a fairly narrow base. The owner told me that though he's been open awhile, he just added storefront signage a couple of weeks ago. It looked like an abandoned building before that, he said.

The menu is uninteresting: a couple of soups, some grilled meats, chicken wings, rice, etc. Perhaps the cook/ owner sensed my quest for something more exciting when he motioned for me to come into the kitchen, where he showed me a couple of simmering pots of "today's specials". With the exuberance of an old school French waiter, he lifted the silver colored lids off of the pots and said "Voila" as he displayed what looked like potatoes in tomato juice. When I asked him what it was, he said "potatoes in tomato juice". "Is it good?" I asked, to which he replied "very authentic". Then he lifted a lid off of another pot and said "This is special lamb". I told him to give me both, and then left the kitchen for a table in the dining area. 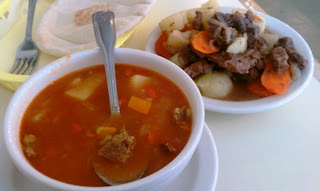 "Potatoes in tomato juice" was served as a soup. It was salty and had some defrosted vegetables and chunks of difficult-to-chew meat along with very soft potatoes. "Special lamb" had the same potatoes and tire-textured meat, though it also had some robust lamb jus which made a decent dipping sauce for the stale pita with which it was served.


I can only assume that Bai Cafe fills some void for Kazakhstani cab drivers longing for a taste of home. They probably go there for the same reasons I continue to frequent places in Chicago that sell shitty "NY Pizza by the slice".