Doubt  and cynicism stemming from the Streeterville location and hyperbolic locavore marketing were shattered by two lunches this week at Local Root, a new casual, quick service place in a culinary wasteland.

The locavore clichés hit me immediately.  Posted on the window outside is a manifesto about how industrial food is killing everybody and how sustainable restaurants like this are going to save the world.  There’s talk about carbon footprints and the owners’ passion for sourcing local ingredients.  There’s a massive sign claiming that Local Root will be a zero-waste restaurant, with every byproduct, presumably from a melon’s seeds to a customer’s feces, contributing back to the earth in one way or another.  And, of course, there’s a chalkboard.  It lists places like La Quercia and Traderspont Creamery and others with resonance among slow foodies and their ilk.  There’s also a promise that deliciousness will be enhanced, not compromised, by the restaurant’s sustainability vision.

I love La Quercia and Traderspoint, and the values above are values I share; it’s just that I’ve heard them so many times from counterfeits that my instinct these days is to discount the claims as marketing gimmick.  The thing is, Local Root really seems to be living the principles, especially the one about deliciousness being paramount.   This was apparent when I walked in and saw that upwards of half the space in the build-out was devoted to kitchen and prep areas, all of which are open for customers to see.  In a part of town like this where lunch volumes are high, there’s a temptation to maximize seating and waiting areas at the expense of cooking space.  This works fine when a good percentage of your product is based on crappy, processed stuff that comes off of a Sysco truck, as is the case at most places in the area.  It doesn’t work when you’re making food from scratch.

At Local Root, even the bread is made from scratch.  I couldn’t believe this, but at a prime lunch hour two staff members were working full time rolling out dough for baguettes that were about to hit the oven.  To accomplish this, they were using a massive prep table and a workspace as big as my living room.  Impressive devotion.

Everything I ate fell somewhere on the continuum from great to good.  Sweet and tangy gazpacho that tasted of wonderful in-season tomatoes with a little spicy kick was probably my favorite item.  At Local Root, bread thickens the gazpacho more than in most versions, and the soup is served with chopped egg.  These are both characterstics of salmorejo, a Spanish gazpacho cousin upon which I suspect this terrific soup is based.  Sweet and tangy are themes here, and characterized the beet salad that was my second favorite items, with a thick, maple-balsamic dressing, a mix of earthy and spicy greens, and crumbles of outstanding blue cheese from Traderspoint Creamery.  A ham sandwich with meat from an Iowa company called Beeler’s was tasty if not particularly special, served on one of those impressively house-made baguette’s which could have been a bit lighter-textured and crisper for my taste.  The fries served with it, however, were exceptional.

I love what the Local Root is doing and will be a frequent customer.  I must admit that I did have to get over some sticker shock first though.  That ham sandwich with fries was $11.49.  The beet salad was a whopping $9.49.  There’s a La Quercia prosciutto baguette on the menu for $12.49 and duck confit on brioche for 15 bucks.  These prices might be more expected at trendy sit-down restaurants with similar culinary mindset, but they’re tough to swallow at a place where the cashier takes your order and hands you a numbered placard to place on your table until a runner brings the food.  That said, there’s a cost to doing a restaurant build-out in the way I described above, and this place is employing a large number of skilled culinary folks, not high school students cooking from a corporate instruction manual as at so many other places in the area.  I want to support that and, more importantly, I think the quality of the food here is worth the prices.

Some fans I know of Northern Thai food consider Khao Soi the quintessential dish of the region, and have a near-obsession with their quest to find “authentic” versions.   With a unique flavor that includes a mix of spices such as cinnamon and clove with coconut and more common curry spices, Khao Soi is indeed something special.  In Chicago we’re lucky enough to have a number of restaurants that serve the dish, with Sticky Rice’s version by far the most complex and delicious, in my book.


TAC Quick has always had a number of excellent Northern Thai dishes, and though I hadn’t tried their Khao Soi in a few years I remembered it fondly, if not with the same gusto as the one from Sticky Rice.  With the recent chef shakeup at TAC,  I decided to see how the place was doing without its well-regarded chef and use Khao Soi as a benchmark to compare the Andy-less TAC with Andy’s new place, ATK. 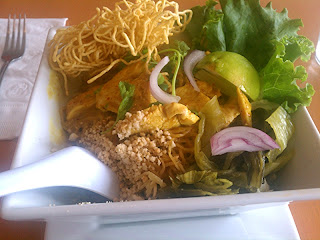 The Khao Soi curry flavors at TAC were as good as I remembered, with subtle heat balancing sweet spice and creamy coconut.  The delicious accoutrements were as I remembered too: sour fermented greens, raw red onions, crunchy ground peanuts and crispy fried noodles that sat atop the boiled noodles within the sauce.  Delicious as it is, TAC’s version is more subtle than the one at Sticky Rice, where there is a pronounced sourness in the sauce and more robust spicing.  Sticky Rice also uses wide noodles instead of the thin ones at TAC, and the heartiness of wide noodles seems to stand up better in a dish like this.  Still, by any account TAC’s Khao Soi was and still is a tasty bowl of food. 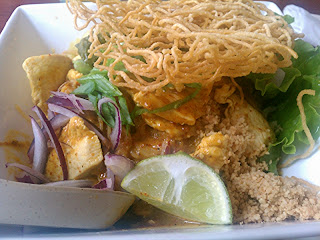 From the identical square white bowl to the placement of a big green lettuce leaf, visually the ATK Khao Soi is identical to the TAC version.  Clearly this is either Andy’s construction that the people at TAC have maintained, or it’s one that he learned at TAC and has taken with him to ATK.  The identical type of noodles and list of accoutrements were here too.  Where the ATK version departed in a bad way was in execution.  The boiled noodles arrived in one big, inseparable clump which made them darn near impossible to eat.  The peanuts were ground too finely, rendering them pasty instead of crunchy.  The curry flavors were there and by avoiding the other stuff I was still able to enjoy this Khao Soi, but the execution errors took it several notches below TAC’s version and if this remains how ATK serves its Khao Soi, I’d say it’s the worst version available in Chicago.  Of course ATK is in it’s very early days and it’s certainly possible that the kitchen will find its footing.
I'm not sure what if anything all this says about ATK, and I certainly hope it is or turns into another place for excellent Thai food in Chicago.  Perhaps the two most important things that came from the TAC vs. ATK battle were (1) encouragement that TAC may continue to thrive even after the loss of its chef; and (2) a reminder to get to Sticky Rice soon for Chicago's best Khao Soi.

UPDATE:
Thanks to Rodney for pointing out in the comments that Aroy recently started serving Khao Soi (Kow Soy on the Aroy menu).  I rounded up a couple of friends and made a bee line over to check it out.  Sadly, the Aroy version of Khao Soi isn't in the same league as the places above or Sticky Rice.  It's basically dorm cafeteria Thai food.  Canned La Choy style-noodles on top, very coconut-heavy curry with little complexity, and completely missing the pickled greens and ground peanuts.  Pretty sad effort from Aroy.
Posted by Kenny Z at 8:47 AM 3 comments:

Pasta in the Parks (Highland and Wicker)

John des Rosiers talks a big game, and at times I've indeed wondered if talk was all he had going.  So it was with tempered expectations that I entered Moderno and ordered pretty much the simplest pasta imaginable - the classic cacio e pepe, or cheese and black pepper.  It flat out rocked.  Moderno uses house made stangozzi which are wonderfully chewy - perfect to me.  In a dish this simple where all the punch comes from black pepper, it darn well better be good pepper.  It was.  This had the aroma and taste of very fresh stuff that had been ground by hand with a mortar and pestle.  The cheese was salty and good, with a slight departure from tradition in the form of melting it atop the pasta.  It worked.

I liked Moderno so much that I'm disappointed that des Rosiers had thin enough skin to block me on Twitter when I joked about some typically delusional tweet of his that I can't even remember now.  Oh well, I guess I can hope that no one has shared my picture with his staff and that I might be able to sneak into his restaurant again someday.

pasta was fantastic, but pasta in didn't work out well for me.  At Nando Milano Tratorria I ordered tagliatelle all'amatriciana, and it was a disaster.  The sauce featured some kind of housemade bacon that tasted like it had been soaking for a year in maple syrup.  The dish was sweet to the point of inedibility.  All wrong.