On the outside, Michoacanito looks like a hundred other humble Mexican restaurants - bright pictures of menu items, Mexican flag-themed signage, handmade signs touting tacos, tortas, etc.  But after a few observant seconds insite, I could tell this place was different.  The cooler was filled with fully-gelled stocks in see-through storage containers.  A woman in the kitchen was peeling and chopping papayas with the utmost precision and care, while a man pressed tortillas by hand.  The stove in the fully-open kitchen was filled with steaming pots emitting powerful aromas of meat and spice. 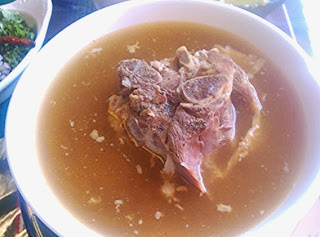 I ordered the consome de borrego (lamb soup) per my server's recommendation.  A hunk of lamb and bone sat starkly in the center of a bowl of not-quite-clear broth with bits of fat floating atop.  On first glance, it appeared that this soup would be just pure lamb without much other flavor.  The kind of thing that, though occasionally enjoyable, I expect more from a Central Asian place than from a Mexican restaurant. 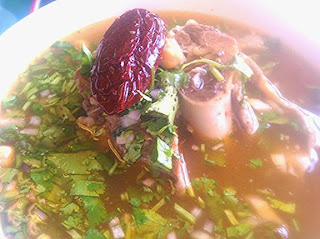 As I started to dig in, the server brought a plate of accompaniments intended to Mexicanize the soup.  I added the onion, cilantro, lime, and a bit of dried chile.  Then when my spoon reached the bottom of the bowl, I realized that there were other goodies - lots of nicely cooked hominy, and a reconstituted chipotle pepper that had been part of the broth-cooking.  The fruitiness of the chipotle balanced the gaminess of the lamb broth beautifully. 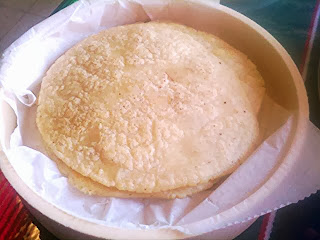 Michoacanito makes tortillas by hand, and the homey,very thick, haphazardly-shaped rounds make that clear.  Be warned, these are probably triple the thickness of most tortillas, so they fill you up fast.  They were great for dipping in the soup.

There's a big menu here, filled mostly with stuff you can find all over town.  With a menu so large it's possible that not everything is a winner, but I feel very confident about the soups.  I also learned from someone at the next table that Micoacanito has something of a secret menu.  People in the know seek out the cook's gazpacho and special fruit cocktail recipes, none of which are on the regular menu.  Ask about fruit, I was told.

I walked into Mexique with negative biases.   The attention given to the Michelin rating system is something of a joke to me, so I’m prone to discount anyplace with a star.  When restaurants take to Groupon, as Mexique did last year, I view it as a sign of decline.  Finally, the place is called Mexique.  Have you ever tried Mexican restaurants in France?  If so, you would know not to name your restaurant after that take on the cuisine.
With my first taste of the night, I was nearly converted.  A spoonful of the “spiced bouillabaisse broth” served in a bowl with something called a “Pescamal”, though more like a thick mole than a broth, was packed with intense roasted chile, complex spicing, and a shellfish undertone that made it unlike anything I’d ever tasted.
Had the kitchen served this compelling puree simply with fresh tortillas instead of the sad rectangular starch plopped in the bowl, it would have been great.  The Pescamal , described on the menu as a corn tamal, had the texture and taste of a bake-and-serve dinner roll, stuffed with rubbery bits of fish that were devoid of flavor.
A trio of sopes furthered the possibility that the chef might be shopping in the Trader Joe’s frozen food section.  The masa pucks were equally sized and perfectly rounded as if by a machine, and they were dense, greasy and tasteless.  The toppings tasted far more pedestrian than their menu descriptions implied.  Bizarrely, two disparate-sounding sauces tasted identical – like balsamic vinegar reduction.  Maybe the kitchen made a mistake with the plating.
The best dish of the night was one featuring braised veal short ribs served with orange-scented mushrooms and peppercorn gastrique.  A well-executed dish even though every component pushed the sweet, fruity side a bit too far.  Had the advertised escabeche de fresas actually tasted pickled instead of just macerated in sugar, this might have been a nicely balanced dish.
Worst was a special of seared tuna loin with chile-infused polenta and “mole de la casa”.  The tuna was seared nicely, but the polenta was so full of lumps that I was shocked that a restaurant of this ambition would serve it.  The mole was way too sweet and overpowered by cinnamon.  Put a straw in it and call it an horchata, and I’d believe you.
The chef at Mexique is mixing a lot of different flavors and techniques, and I suspect there are cases where this produces more winners like the broth served with the Pescamal.  Unfortunately, everything skews very sweet and there is a lot of flawed cooking, including a special level of ineptitude with cornmeal based dishes.  For a place with any degree of Mexican makeup, that’s hard to forgive.