Pasta all’ Amatriciana is among the simplest and most delicious things I’ve ever eaten.  It’s quite easy to make it well, but by now I’m used to the fact that most American restaurants suck at pasta, so it was with limited expectations that I set out to find a decent bowl downtown at lunchtime.  I tried 3 versions.

Bar Umbriago – “Spaghetti Amatraciana”
I tried to chalk the misspelling up to a simple careless typo, but inside I suspected that it was a sign that this place might not be too serious about how they create the classic dish.  It turns out that the sauce here was the porkiest and perhaps tasties of all that I tried.  The guanciale had been cut into thin, long slivers that rendered plenty of fatty flavor and retained a silky and luscious texture.  The spaghetti was cooked well, and this could have been an excellent dish had the kitchen halved the quantity of sauce and bothered to let it cook with the noodles for a bit (instead, the unsauced noodles sat at the bottom of the bowl with giant ladles of sauce placed atop them).  As it was, this dish was mostly ruined by the two sins that I see in almost every Italian restaurant: oversaucing, and failing to cook the pasta and sauce together for a bit after combining them. 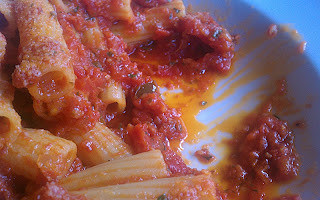 Stefani chooses a spelling common and somewhat controversial in , and also pairs the sauce with rigatoni – also more common in than elsewhere in Ital, from what I understand.  Stefani departs from Roman or Italian or just plain good cooking, however, in just about every aspect of this dish.  It arrived at my table about 90 seconds after I ordered it, making pretty clear that there are some precooked noodles in the back waiting to be sauced.  The limp rigatoni certainly reinforced that likelihood, and this dish had a massive amount of thick tomato sauce and absolutely zero pork flavor or texture.  For an ungodly reason, some onions had been caramelized separately (“onion confit” was how the server described it) and then added to the sauce at service, lending a sickly sweet element to already-sweet tomato sauce, of which there was about 5 times too much.  This was among the worst-tasting pasta preparations I’ve had anywhere. 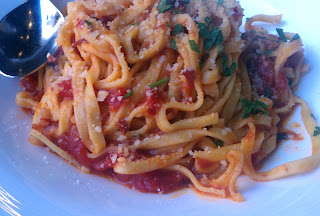 At 15 bucks, this was the most expensive bowl I tried.  That may seem reasonable when you consider that La Madia makes its own guanciale out of Slagel pork and uses fresh tomatoes from a local farm, according to my server.  The kitchen here is also far more adept at saucing pasta than either of the others.  Unfortunately though, as with the Stefani version, La Madia’s sauce lacked much discernable pork flavor.  It was just a good, fresh tomato sauce with some extra fat.  Perhaps they didn’t use enough guanciale, or perhaps their guanciale just isn’t that good.  On a related note, I do not understand why restaurants want to make their own guanciale.  Is what you create using a make-shift kitchen apparatus going to be better than what experienced producers who do basically nothing but cure pork can create?  Not a chance.  Similarly, though it sounds nice to say that you make fresh pasta, this is a dish that is better with the al dente texture that only dried pasta can provide. 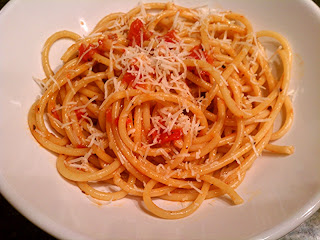 I didn’t much care for any of the versions above, and perhaps that’s because this is a dish that’s best made at home, and I bring the bias of my own version with me when I try it at restaurants.  Again, this is a simple and easy dish, but there are five principles that I believe must be followed.  First – this is essentially a pork fat sauce, not a tomato sauce. You can see from the picture here that each noodle is glistening with flavorful fat.  The tomatoes provide some sweetness and plenty of acid to balance things, but pork fat is what must be at the forefront. 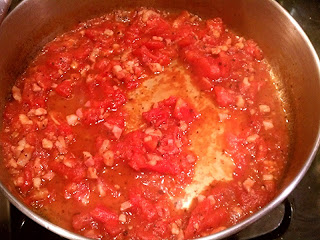 Second, the guanciale should provide a textural element, not just flavor.  To some people that means crisping it up, but not to me.  I cook the guanciale low and slow until it renders a lot of fat, but I don’t let it brown and the texture I’m looking for is tender, not crisp.  It retains a lot more flavor that way.  Third, I would never serve this dish without a hearty dried pasta that has been cooked short of what most people probably describe as al dente.  Fourth, Parmigiano Reggiano is the wrong cheese for this, and to me it basically ruins the dish.  It’s too nutty, which distracts from the other flavors.  A salty, straightforward (cheap) pecorino works best here.  On that note, I have never added salt to pasta all amatriciana.  Between the guanciale, the pasta water I add when cooking the noodles and sauce together at the end, and the cheese, there is always plenty.  Finally, though the most traditional versions probably don’t use hot pepper, I frankly can’t imagine eating this without some.  It’s not so much for heat, but a small dose of capsicum stimulates the taste buds in a way that enables the flavors of to dish to linger long after each bite.